Recent years have seen great progress in extending the techniques of laser cooling to molecules. Certain types of molecular ions are good candidates for getting to ultracold temperatures depending on the scheme used. One particularly promising approach uses neutral atoms to sympathetically cool the rotational and vibrational modes of molecular ions [1]. In this method, alkaline earth monohalide ions are exceptionally well-suited in part because they are very strongly ionically bound and are energetically forbidden from charge exchanging with appropriately chosen neutral sympathetic coolants. In our lab, we have studied the formation of the barium monohalide ions BaF+ and BaCl+.

Starting from a Coulomb crystal of Ba+ ions, we produce translationally cold BaF+ and BaCl+ ions by leaking various gases into the vacuum chamber. We can then determine the reaction rate constants by measuring the loss rate of Ba+ ions. To analyze reaction products, we then use well-established mass spectroscopic techniques.

Ba+ ions happy to be confined in a Paul trap.

A chain of mostly 138Ba+ ions and a few other Ba+ isotopes. 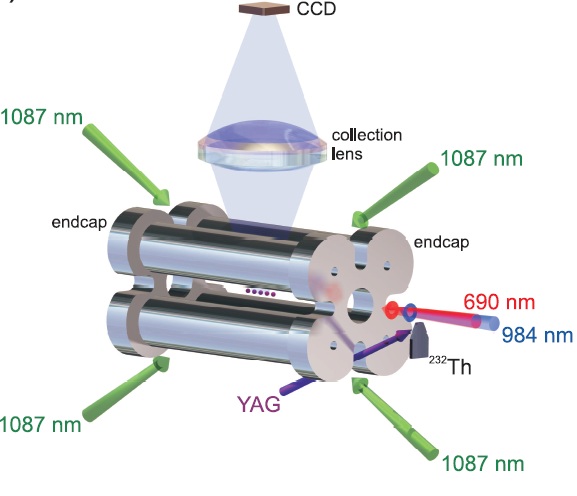 We propose to apply AMO technologies of ion trapping and cooling and high resolution spectroscopy to the manipulation of a nuclear excited state. The subject of this research is the thorium-229 isotope, which, uniquely, has an excited state in the UV optical spectrum.

In order to excite most nuclei above the ground state, energies of order keV to MeV are required. Such excitation energies are for the most part impossible to attain using coherent light sources with today's technology. There are, however, a few nuclei with a smaller separation between the ground and excited states, most notably 229Th, whose first excited state lies only a few eV above the nuclear ground state, making it accessible to commercially available lasers in the UV optical regime. In addition to the ability of extending atomic physics techniques to the nuclear regime, this nuclear transition could be used for a next generation of optical clock which is considerably less sensitive to external fields due to shielding of the nucleus by the electrons.

Our group, in collaboration with the Kuzmich group, have made progress toward directly observing this transition by using trapped Th3+ ions. Th3+ presents the advantages of having a convenient level structure for direct laser cooling and fluorescence detection and being relatively easy to produce and trap in a conventional linear Paul trap down to the single ion level. 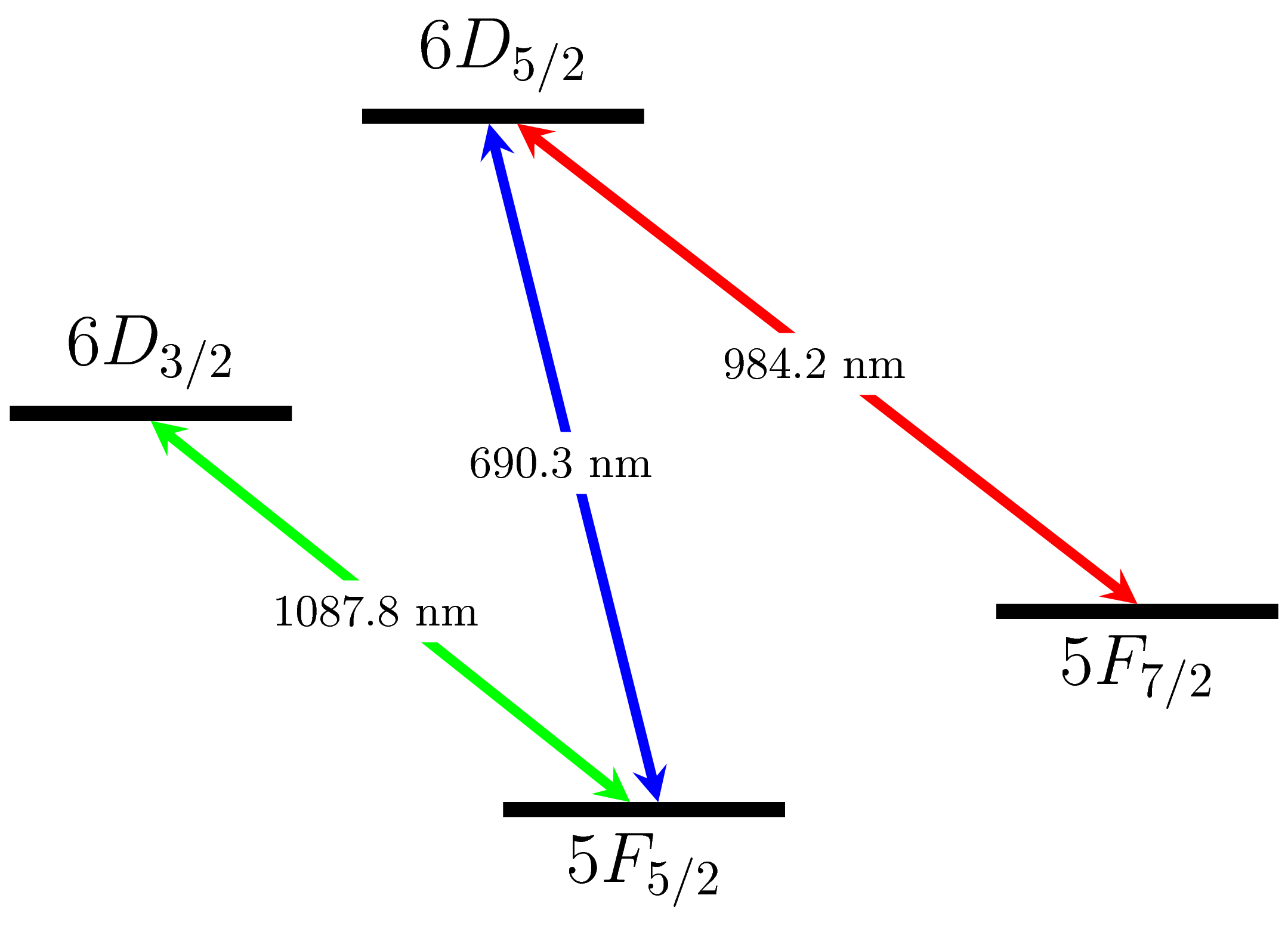 984 fluorescence images of laser cooled Coulomb cyrstals of 232Th3+. Note the large inter-ion separation due to the charge state. (Top) A crystal of ~1700 ions. (Bottom) A chain of 14 ions.

Working with Th3+ does, however, pose several challenges. Thorium has a very high melting point (> 2000 K), which makes producing a neutral beam of thorium for subsequent ionization incredibly difficult. To get around this problem, and to more easily produce triply charged ions, we employ laser ablation. This introduces a further complication in that the ions start off incredibly hot (~104 K). The most straightforward solution then is to initially cool the hot Th3+ ions via collisions with a buffer gas. This inevitably adds contaminants to the vacuum system which react with Th3+ and reduce the trap lifetime to only minutes. This is exceptionally short compared to commonly trapped ions such as Ba+ which can remain trapped for days under good vacuum. We have studied chemical reactions and charge exchange between trapped Th3+ and various gases in order to identify loss mechanisms and extend the trap lifetime. 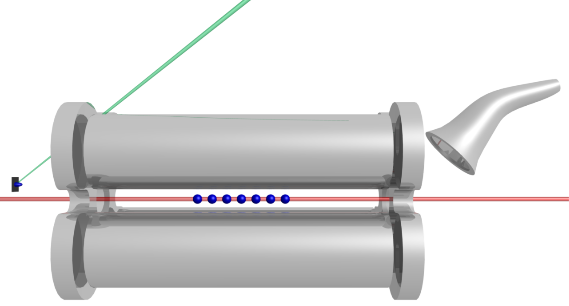 An illustration of one a linear Paul trap used with Th3+. Ions are created using a tripled YAG ablation pulse (left) and loaded into the trap by gating end cap voltages. Fluorescence detection is performed using 690 nm and 984 nm beams propagating along the trap axis. Trap contents can be measured using a channel electron multiplier (right) by allowing the ions to escape through the right end cap. 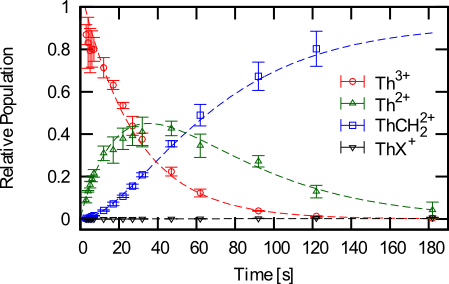 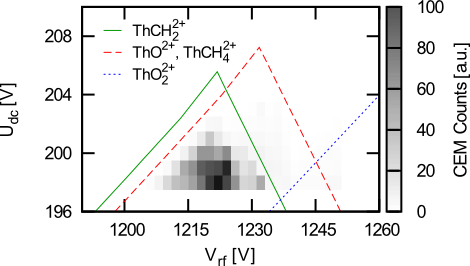 (Left) Evolution of trap contents as a function of time in the presence of 2x10-8 torr of methane and 10-4 torr of helium. (Right) Stability diagrams for several molecules formed with thorium when methane is introduced into the system.